So you’ve probably come across those fancy keychain flashlights that will recharge from sunlight, using an integrated amorphous solar module. 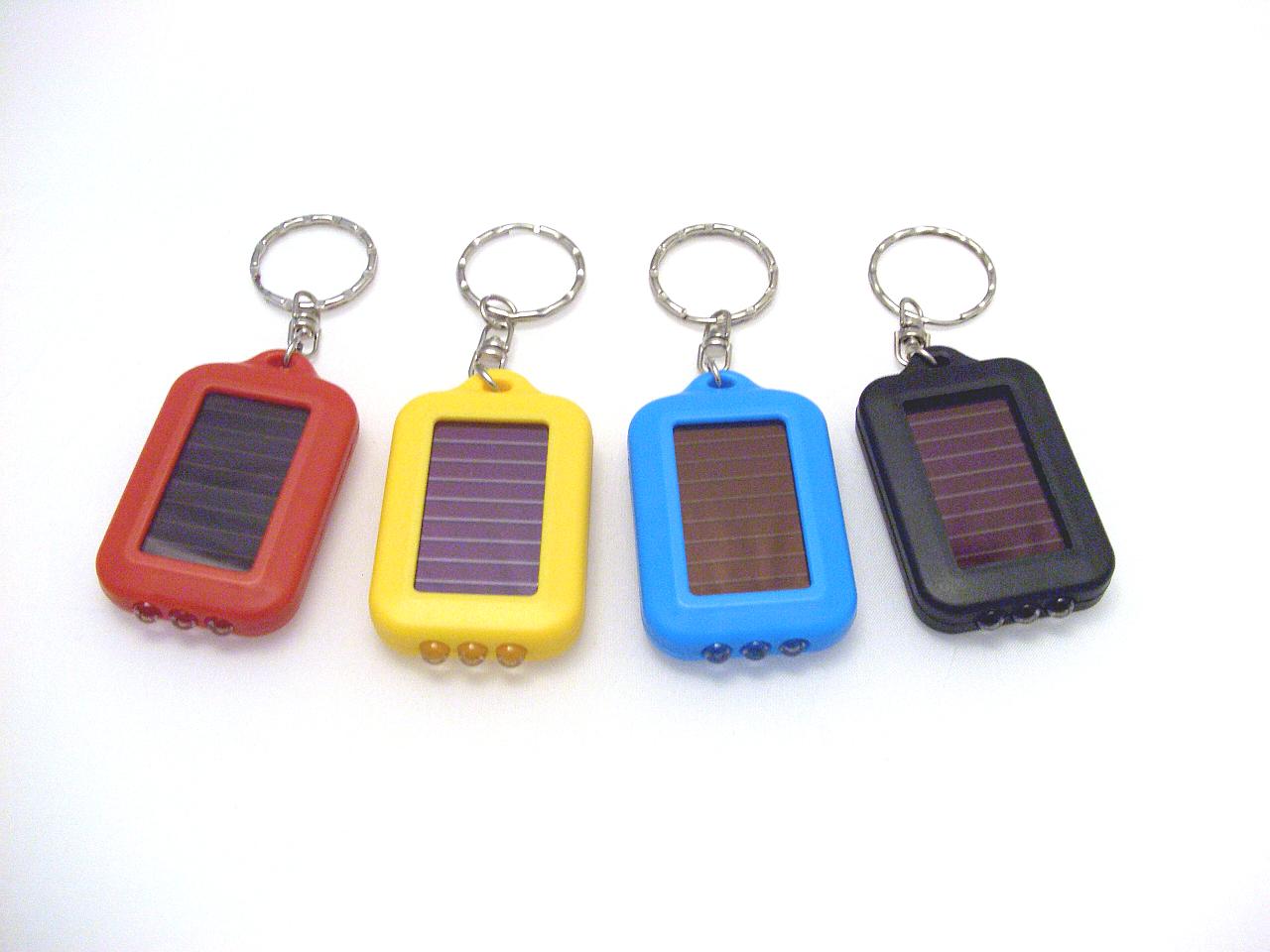 They usually contain a rechargeable LIR2032 battery (which is actually just the Lithium-Ion variant of the popular CR2032 single-use coin cell battery found in countless devices) with solder tabs, and a blocking diode that will simply prevent current from flowing back through (thus destroying) the solar module while there is no sunlight, causing the solar output voltage to drop below the battery voltage.
This certainly does not sound like the ideal way of effectively charging a Lithium-Ion battery these days, yet it is still working quite well as long as the battery is in good condition – and there will be intense direct sunlight at least once in a while!

So the major issue with this design is not really the charging regulation into the battery, but rather the regulation of current flowing from the solar module: when you short-circuit a solar module, nothing really happens – there will be a current flowing through the wire, but at almost no voltage, since the output voltage collapses immediately due to the short circuit, so the wires will hardly become warm after all, and the module will rather, simply speaking, just stop converting solar energy to electricity. This is actually what on-grid solar systems will do on power outages, when there is no grid frequency to synchronize with, besides they could not really supply enough power to serve the whole neighbourhood. In general, when feeding power into a public grid, it would almost behave like a short circuit to the solar system, which could not produce energy since the load of the grid (accepting way more power than the system could deliver) would immediately cause a voltage drop at the output of the solar modules – which is why those on-grid solar inverters have a component called the "Maximum Power Point Tracker", which constantly adapts the load that is "attached" to the modules, in order to get the highest possible output.

Long story short: once the battery in your solar flashlight is discharged below a point that is no longer healthy for lithium batteries (which happens quite easily – as soon as you realize the LED’s start fainting, it’s probably already too late), it will hardly recover nor fully recharge in the dim surrounding light.

After all, it had me looking for replacement LIR2032 cells to revive some of those flashlights, but curiously it turned out those are way more expensive than buying a few whole new flashlights, wtf!? However, since they really are ridiculously cheap (and also make good gifts for people who don’t have one yet), I ordered a pack of 10 for less than $15. They all had black plastic, that’s probably cheaper. Now just rip out the inside and stick it back into one of the old colourful plastic cases – so I thought. And the surprise was inside, they were all fakes!

I.e. they had real solar modules (voltage varies depending on sunlight), real bright LEDs, the same plastic cases… Just the batteries were two CR2016 cells stacked on top of each other, resulting in a 6V disposable battery rather than something rechargeable. However, they even kindly left out the diode that would connect the solar module to the battery at all, so at least it would not leak or explode when attempting to recharge it in bright sunshine, how graceful!

So if you got one of those, I’d definitely recommend checking what’s inside there. Some of them will pop open quite easily after pressing firmly on both sides, while others seem really tightly sealed and might not open up flawlessly. I figured the best way that causes the least visible damage is by using a small screwdriver to gently start prying between the LED’s and the top or bottom half of the plastic housing, then sliding some phone opening tool or similar soft plastic thing in between, slowly broadening the gap from all sides. Some of the joints might still crack though, so be careful and maybe use a drop of super glue to bond them back together in the end. 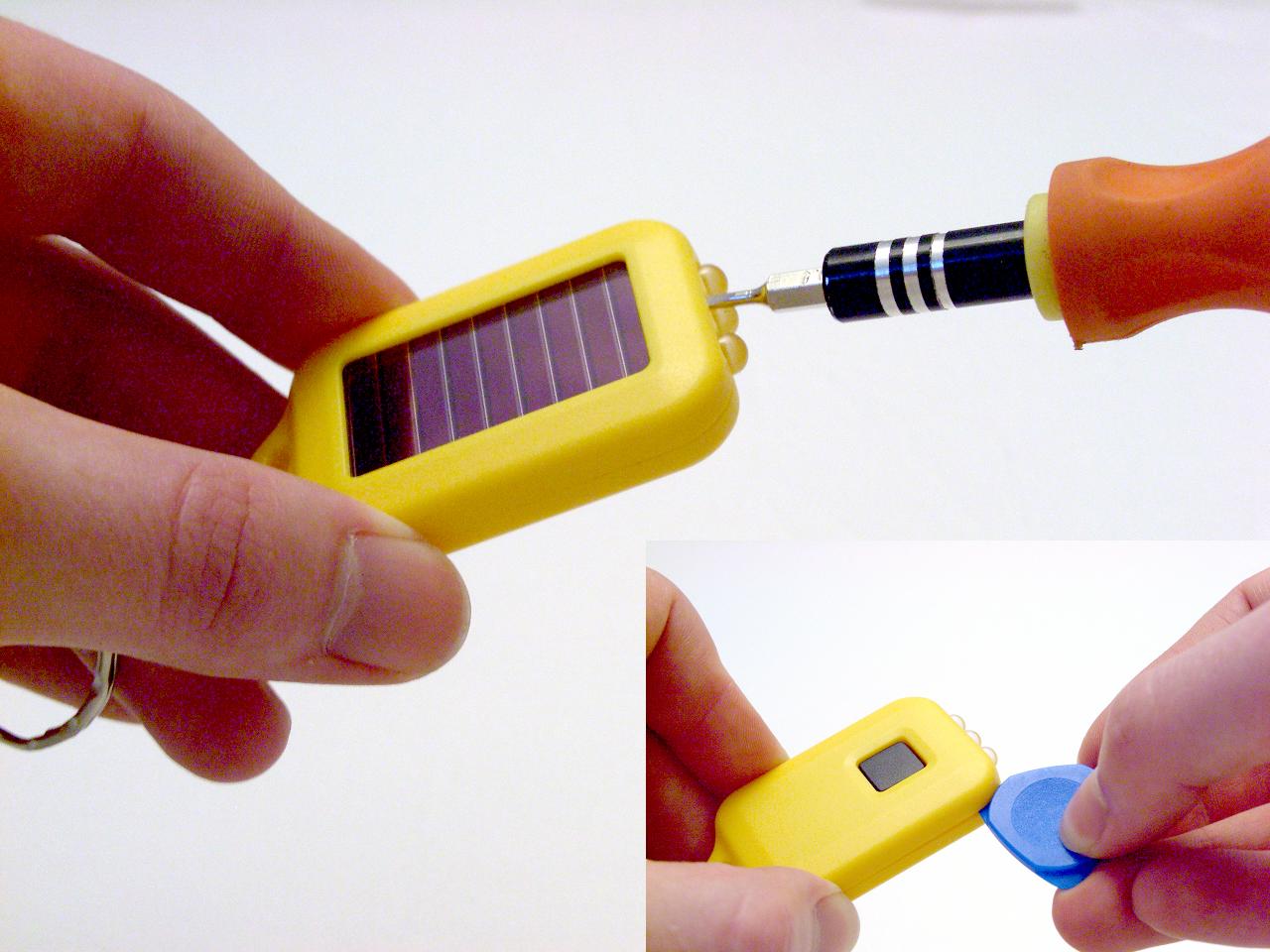 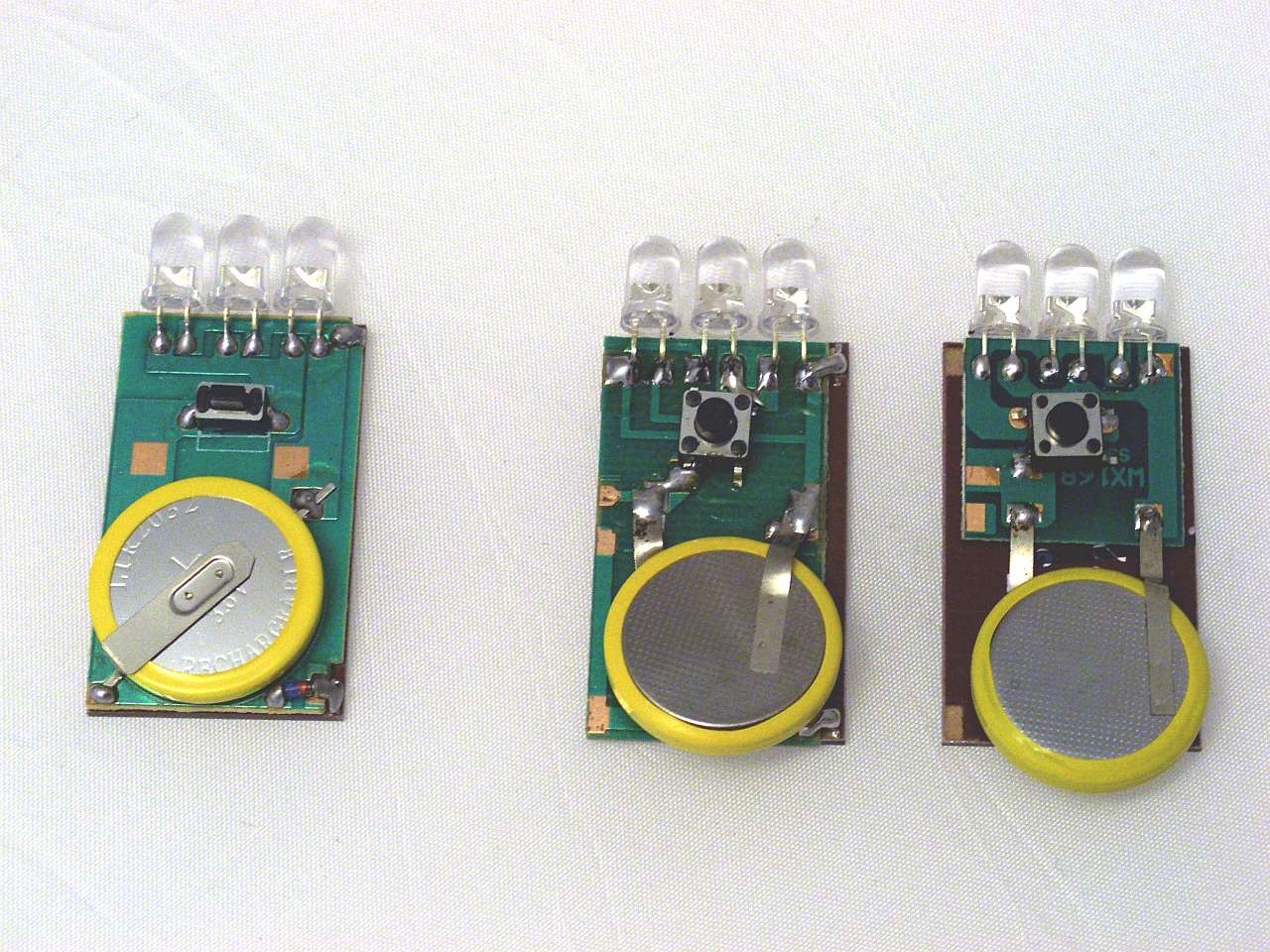 Now the one on the left is what it’s supposed to look like, compared to those two examples of fakes i got from various sellers on both ebay and AliExpress… 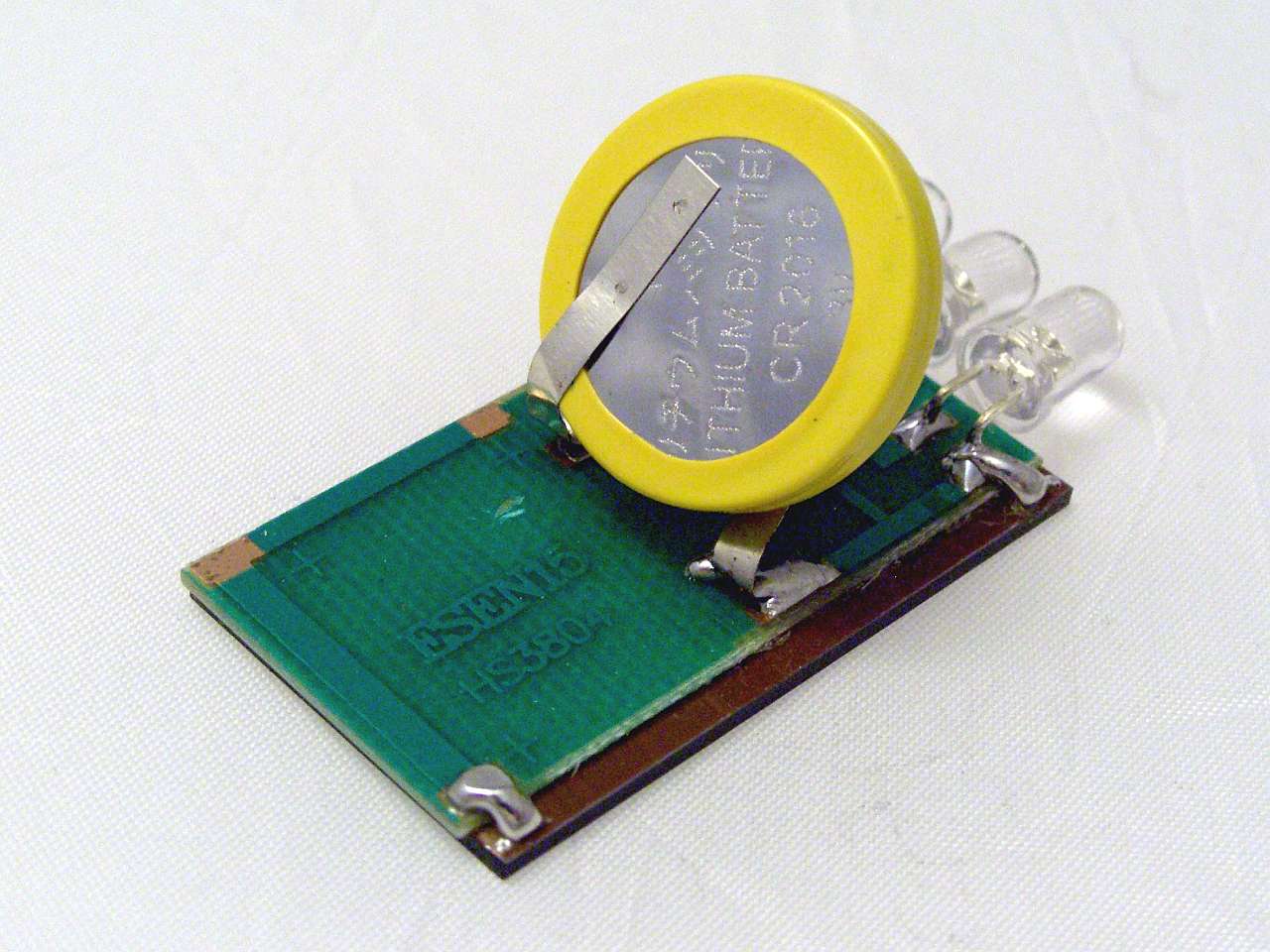 Which finally leads me back to the main intention of this post: What really bothers me about this is not that you had accidently received a damaged item and thus get a replacement or refund, but the fact that these fakes will actually do their job well for many weeks or even months – until the batteries are depleted, and probably the majority of users will never even know they had fake ones until there’s no more chance of getting money back or anything! (Maybe it could even be considered an exaggerated form of planned obsolescence, since people hardly seem to care about what’s wrong with a product these days, as they can simply get a new one for cheap…)

Even worse, it is the combined ignorance and incompetence exposed by the sellers, who probably just distribute the items and never even looked inside the cases themselves. Now how do you explain to a Chinese seller that they’re missing a rechargeable battery in their products, when you get replies (assumingly web-translated from Chinese to English) of the sort like “dear, it does not work with battery, it will recharged by the solar!” I suppose many of them don’t even intend to rip you off after all, but just have no idea what the inside of the things they are selling should look like in the first place…

Considering they are just about $ 1.20 – 1.50 per item, it is not even satisfying to get your money back after numerous attempts of explaining the issue to them (besides having waited three weeks for an item you would not use as a gift to anyone you still somewhat care about), but that’s exactly what happens – they click the refund button, hardly causing them any financial loss, the dispute will be automatically closed(!) since everything is fine now that you got your cash back, they just keep selling their crap to countless new suckers, and not a single fuck was given by the ebay customer service that day!

So let’s not have them get away with that anymore, and annoy the marketplaces’ support departments and the vendors until they realize it’s not worth selling crap anymore =)

As an addition to the images above, I also made a somewhat more, uhm… "internet-compatible" version, that might simplify helping others (or even vendors if you dare) to understand the issue… 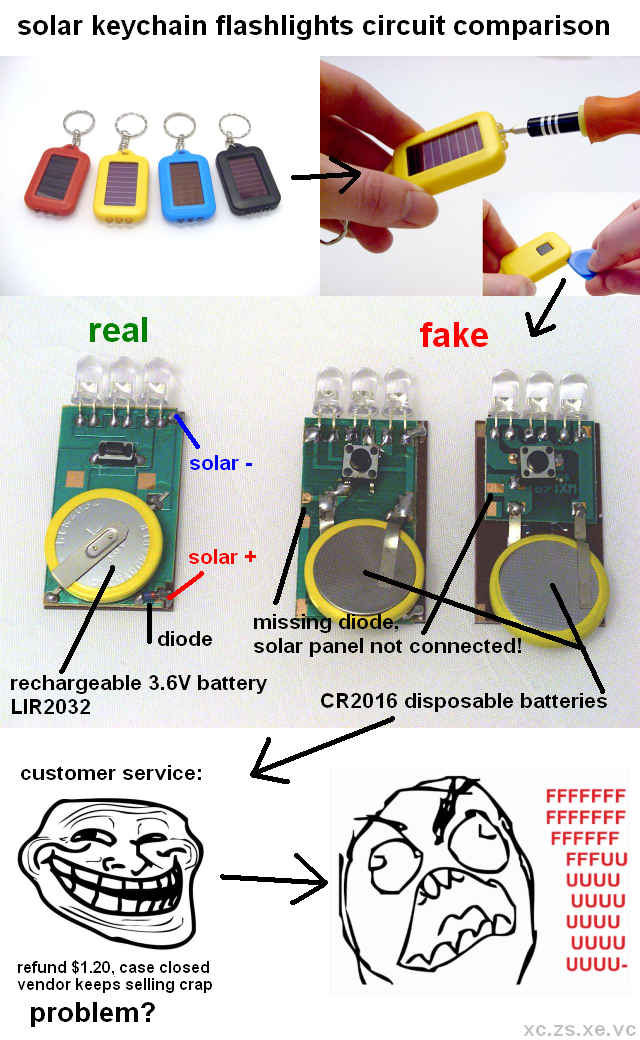 Meanwhile, I was even considering to make a complete redesign of the circuit, using one of those new-fangled bq25504 Energy Harvesting controllers from TI, which basically feature the above mentioned MPPT capability that would allow for charging the battery to the maximum – slowly but effectively – even in the dimmest light when the battery voltage is way above the solar module voltage already!

However, looking at the bill of materials (and thus PCB footprint) of the reference minimum design kept me from doing it at this time. There’s just too many additional SMD components required to make for some cool hardware hacking project for everyone yet, so I guess we’ll have to wait for a company to come up with some fully integrated one-chip harvesting solution, that could be painlessly hand-soldered, maybe even into the existing design rather than making a custom new PCB layout.

This site uses Akismet to reduce spam. Learn how your comment data is processed.